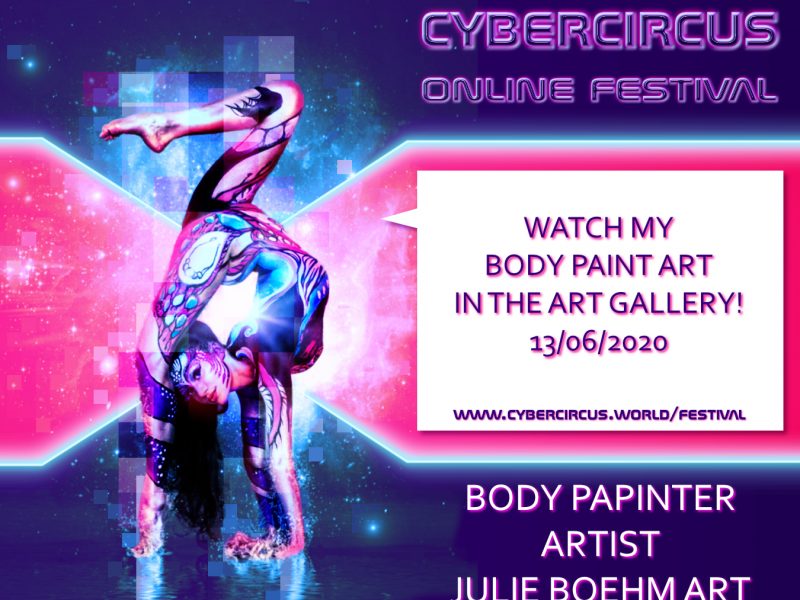 Introduction to Bodyart : Giving an insight of the pipeline of planning, painting, shooting and postproduction

Freelance artist in the fields of painting, photography and digital mage editing, body painting and film:
“About the humanistically theoretical art studies at the Academy of Fine Arts Vienna I have made my way into the applied art of film and bodypainting. I love artistic collaborations and working with people.”

Julie Boehm was born in 1987 in Traunstein (Germany/ Bavaria).
For 17 years she danced at competitive level in rhythmic gymnastics. The training shaped her
artistic and aesthetic perception for the movement of the human body sustainably.
Her ambition to perform at competitions also conditioned her to regularly participate in music competitions
(“Youth makes music”, “the lively harmonica”). She achieved the golden performance badge in clarinet here
2004.
After that she focused completely on the fine arts in the advanced course at the grammar school.
After her Abitur 2007 at the Karlsgymnasium in Bad Reichenhall she made the leap to the “Akademie
of Fine Arts” in Vienna. There she discovered her passion for modeling and body painting in 2009 at the
framework of art projects and international competitions.
In 2011 she graduated with a diploma for “Multimedia” at the Graphische in Vienna. Afterwards she went for one year to Berlin, to work as “Creative Director” for the art magazine Spykeheels
During this time she discovered the medium film for her art and began her studies in animation at the
Baden-Württemberg Film Academy.
2015 she won the ‘Open Category’ amatory award at the World Bodypainting Festival.
2016 she reached the title of the North American Championships in Atlanta in the category ‘Professional’.
Besides her work as a bodypainter she is also very successful as a picture editor and won a total of three times the photo competition at the Bodypainting World Championship.
In 2018 she graduated from the Film Academy Baden-Württemberg. Her diploma film “Paris you got
me” has meanwhile been awarded more than 60 international prizes.
Since 2018 she has had her studio in Lutherstadt Wittenberg and works full-time as a freelance artist in
painting, photography and digital image processing, body painting, film and animation.